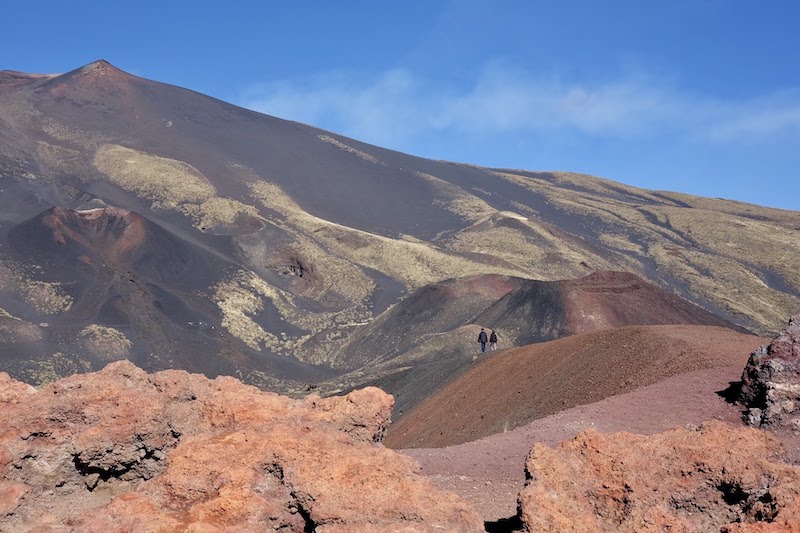 Mount Etna, is an active stratovolcano dominating the northeast corner of Sicily. We went exploring Mount Etna with our 3-year-old kid and it was a fantastic experience for the three of us!

The Landscapes of Mt. Etna

Etna is Europe’s tallest volcano and is also one of the most active in the world. It has been active for around 2.6 million years, but the eruptions today are relatively harmless, and the last major eruption happened in 1992.

Mount Etna is so large that it’s visible from more than half of Sicily on a clear day. It also has so much to offer and see: great hiking at different trails for all levels.

If you visit Etna in winter the snow-covered slopes offer two of Sicily’s three ski resorts. From November to March you can ski the slopes of the volcano one day and enjoy the beach the next!

Nature and landscape on Mt. Etna vary from woods and vineyards to volcanic craters and barren fields of lava. The mountain covers about 581 kilometers and 20 towns. The way up to Etna goes through rolling hills, forest, fields and beautiful small medieval towns. 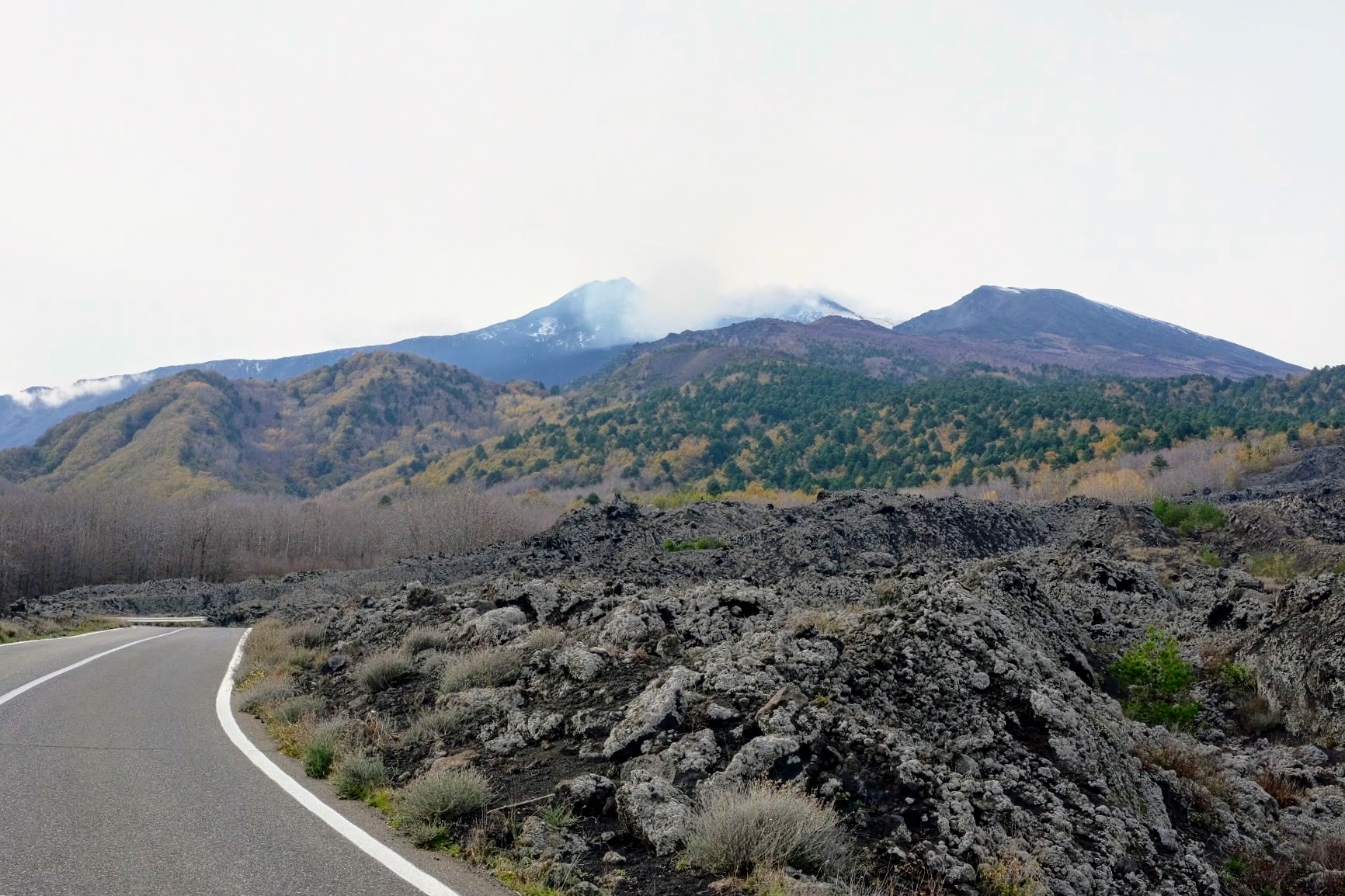 November is the perfect time to visit. The crowds are gone at this time of the year. Like many beaches we went to in Sicily in November, you can have the place to your self if you go in the morning. Around midday, a few other visitors started to come around, but the area is so big and it still felt like we were alone on Mars some moments.

We walked up the Craters of Silvestri, which is accessible directly from the car park level. There are three craters at Silvestri, two was within an easy walking distance also for our 3-year-old Sixten and his short legs. We first walked up the closest crater and peered down into the center of the crater. It was fun for Sixten to see this and for us to explain to him about the color of the ground and the lava.

The third main crater rises up to 2100m and requires a little more of physical effort to reach. We walked it slowly and with some breaks for Sixten to play in the volcanic sand. Also, Sixten sat on Matias’ shoulder the last bit of the trail. On the top the views were stunning! (It was foggy the day we went but if the weather is clear you can get great views all the way to the city of Catania).

The whole volcano experience was a lot of fun for Sixten. He, like us, was amazed by the landscape. We spent an hour on the top, Sixten playing with rocks and just enjoying the colors and the crisp air. On the way down it was a lot of fun running through the soft volcanic soil.

The North Part of Mt. Etna

On the north part of Etna, the landscape is completely different from the south side. We went there the day after our hike at the south side and also enjoyed the drive up and the black lava stone landscape with the mountains in the background. 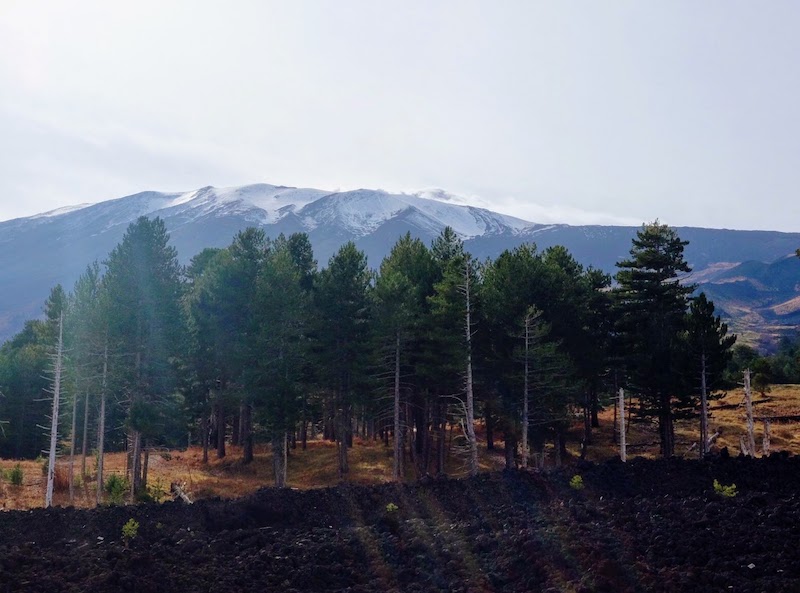 The north side of Etna offers some of the best conditions for agricultural production, and it is believed to be Sicily’s best wine-producing region. I took my chance to visit the winemaker Frank Cornelissen, that produces beautiful natural wine. I had a private tour at his ancient vineyards, in the northern valley of Etna, located between 600-1.000 meters altitude, followed by a tasting of his distinctive natural wines, which are pure expressions of volcanic soil. Kids are not allowed in the wine cellar, but the little village, where the cellar is located, has a good playground where Matias and Sixten killed time waiting for me. 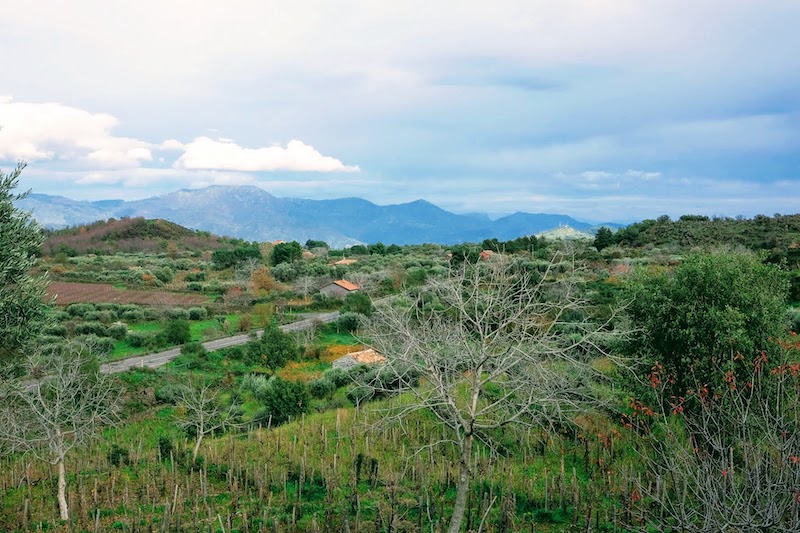 How to get to Mt. Etna

The best choice is to take the south route by car up the mountain and park your car by the Rifugio Sapienza or the restaurants on Strada 92.  The south parking area is located on an altitude of 1986m above sea level and from here, you can head up the volcano by foot or by cable car. (30€ Pr person).

We had made sure to bring enough warm layers and was prepared for the cold temperatures on top of the mountain. When the sun came out, it was a bit overkill though with wool jumper and jacket. Our sneakers did just fine, but if you want to hike to the top of the volcano, hiking boots are recommended.

If you like exploring Volcanoes, you should head to the Aeolian Islands which belongs to the Sicily region.

One Reply to “Climbing Etna with Kids”

PrevPreviousPalermo in One Day: What to See and Eat
NextTwo Days in BangkokNext