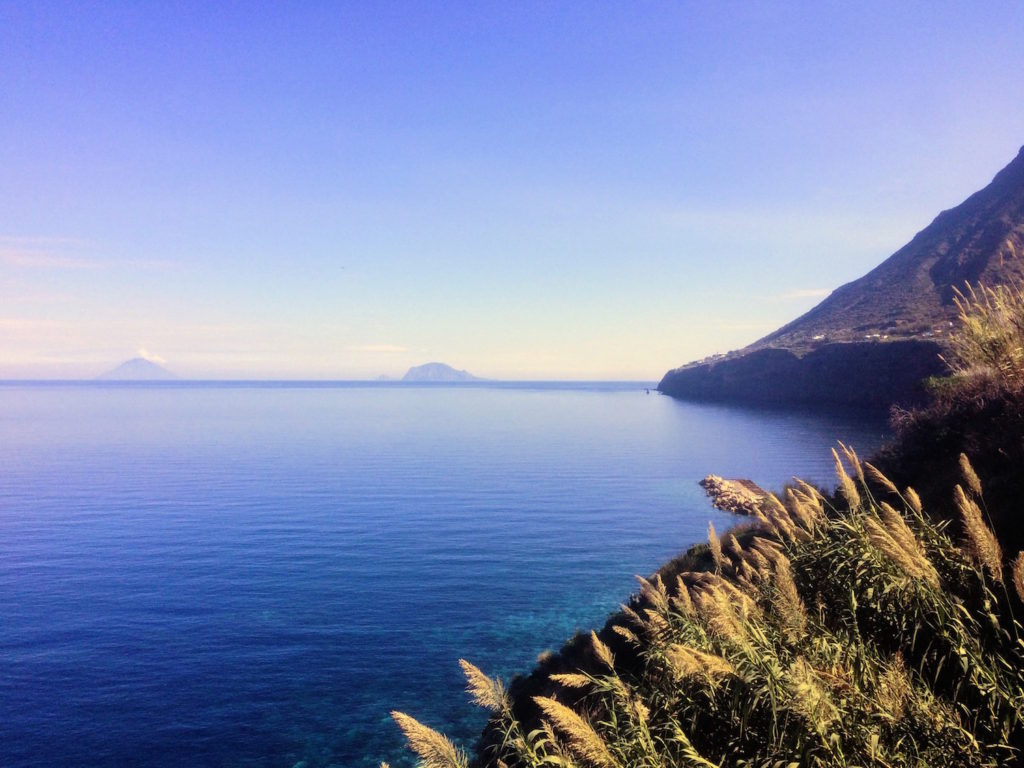 From Palermo to The Aeolian Island Salina

The Aeolian island Salina north of Sicily is a volcanic island where you can hike the extinct volcanoes and scuba dive in the Tyrrhenian Sea.

Palermo on  a Saturday night

It was October when we flew to Palermo and landed in the evening where it was a nice 22 degrees.  It was a Saturday night and Palermo was buzzing, with a lot of party people, scooters and cars queuing in the streets, and all the restaurants filed up. It was about 10 pm when we found a pizza restaurant, we could get a table at. The place was busy with locals. After some waiting time, we got a table outside and had tasty pizzas and local beer, while our baby fell asleep in the stroller -perfect!

A trip to the Aeolian island Salina in the Archipelago

Our plan was to go to the countryside, so the next morning we sat out to catch a train heading to Milazzo and then a ferry to the small Aeolian island Salina.

The train from Palermo to Milazzo station takes about 3 hours and then it’s about 30 minutes walk to the harbour. If you’re not up for the walk, there is plenty of taxis and a bus service as well.

Salina is one of the most beautiful places I have been. It’s an Unesco-protected Island, the second largest of the islands in the archipelago. The largest of the Aeolians’ is Lipari, and the most popular is maybe Panarea.

Salina has a green, lush nature and tranquil atmosphere. It is a good place for hiking, as it has a few different trails on the two volcanoes that shape the island. The two volcanoes on Salina are also the Aeolians’ two highest peaks: Fossa delle Felci (962m) and Monte dei Porri (860m).

We stayed in the small village of Malfa, as I had found a nice house with a rooftop terrace overlooking the sea. The owner was a local man, who picked us up when we arrived on the ferry and showed us great hospitality. The house was placed in a lush garden filled with flowers, birds and lemon trees. We had the whole 1first floor at the house. (Price was only 50€ pr. Night. Let us know if you’d like the details).

From our terrace, we could see the active volcano Stromboli emitting a stream of smoke from its craters. At night, there were no streetlights close by and in the darkness, we could, besides the amazing star sky, see the lava sprinkle up from the volcano.

The slow life of Malfa

Slow pace, charming, quiet, and friendly people. That’s how to describe the life in Salina and Malfa in October. It suited us perfect.

Malfa is built around steep roads, and hills that lead down to a small fishing port and to a pebbly beach cove. The vegetation is rich and green. Along the hills are terraced vineyards of the Malvasia grape. Farmers are cultivating crops like capers, olives, and figs up against the slopes of the volcanoes.

We spent our days in Malfa hiking, swimming in the still warm ocean, enjoying the amazing seascape, and eating local food on our terrace.

Salina is much more busy in the summer time but Malfa was super quiet at this time of the year. This is where you escape from tourism. Most restaurants had also closed for the winter. There was the possibility of taking a boat trip and to visit the local wineries, but we took it all tranquil.

Hiking from town to town around Salina island is easy. You can easy spent a day or two hiking up through the wild vegetation on the volcano of Fossa delle Felci. You can start out in Malfa and end the hike in Santa Marina Salina, or vice versa.

Our best walk/hike though was from Malfa to the tiny beach village Pollara. The main road out of Malfa, runs against high slopes off volcanic cliffs, towards Pollara. On the way to Pollara is located a great panoramic viewpoint from where the ascent to the volcano Monte dei Porri starts. Further along the road, is a walking path leading to the town. The path runs on a hill slope where a large number of huge cactuses, caper bushes, and wildflowers grows. This hike was breathtakingly beautiful.

The original beach in Pollara is closed because it’s been suffering from erosion. There are a paved path and stairs carved out in the rocks leading down the mountainside and from here is a great view of Pollara bay.

We slowly ascended the mountain again while watching the sunset, and before catching the last bus back to Malfa.

Salinas local buses connect the small villages and run a couple of times during the day. We took the bus to Rinella one day, passing the green slopes, along winding roads arriving at the south coast of Salina in the village of Rinella. This fishing village has a black sandy beach and just next to the beach starts some great hiking routes.

Rinella is a bit more lively than Malfa, as the ferry also docks here. There were a couple of open bars and restaurants and there was a lively atmosphere at each place. (Even though the villages are small and quiet during siesta, there is always a bar or restaurant open).

You can easily combine a trip to Salina with the other Aeolian Islands and I would recommend you to do it. We traveled from Salina to Lipari on our way back to the mainland. We stayed just for a night at a hotel in Lipari centro, close to where the ferry docks. I found a great hotel offer on Booking.com the day before, which is often possible when it’s out of season.

How to get to Salina

Take a hydrofoil ferry from Milazzo to the port town Santa Marina Salina, or the fishing village Rinella. It takes 1 h 25min. Cost about 18€ (one way).

The main town Santa Marina Salina is where most locals live, and thus it has more to offer than the islands small villages. Stay here if you like a good selection of restaurants, hotels, shops, and supermarkets. We also noticed a diving center, arranging both scuba and snorkeling trips.

2 Replies to “From Palermo to The Aeolian Island Salina”